YORKSHIRE POINT TO POINTERS GET THE BETTER OF JACK FROST!

The Yorkshire area Point to Point club successfully ran on Sunday 29th January having been postponed due to Frozen ground earlier in the month. Sighs of relief all round on Sunday morning when despite a wintry scene the course was passed fit to run. And boy did they run! The horses coped with the chilly weather admirably, however the bystanders were left hopping from foot to foot in an attempt to warm up. Of course no problem for us on the AGA stand, this was truly AGA weather! 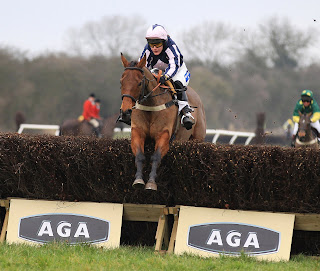 We had baked chocolate brownies, home made cookies, flapjack and something which Michael said resembled birdseed (homemade energy bars sprinkled with sesame seeds!) All of which went down a treat. Along with hot soup and coffee we weren’t going to be put of by a few degrees of chill.

We were warmly welcomed by Charlotte and Emma, the most glamorous double act I have seen – and I had to ask, yes they are twins. They helped with advice such as judging best turned out, introducing us to the owners of the runners  (to whom we gave £25 vouchers each, gratefully received and soon to be spent!) and helped us with the presentation of the prizes. 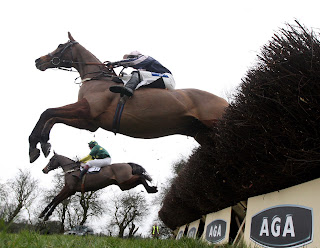 Mrs Tinkler and son Andrew explained about the form and what the race card denotes about the runners, so we were all set to pick a winner. Except that’s not necessarily how it works in point to pointing – which is why it is such fun.

The AGA ladies race was a hard one to predict with some strong contenders, including recent winner Sea Scout, however that did not allow for the fact we were on Easterby turf. Jacqueline Coward was on her own stamping ground and was in sparkling form holding off all challenges on Amicelli. Sea Scout and Claire Metcalfe had to be content with second place. Sam Drake on Optimistic Harry added a third place to her points tally keeping her on the Aga Total Control score board and Joanna Mason bought in Impact zone for a very respectable 4th. Thus giving Mick Easterby 2 places for 2 granddaughters. There must be something in the genes, or maybe the water around Sheriff Hutton? 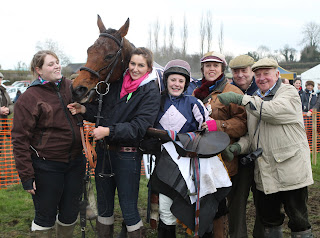 The lovely ladies bounced on to our stand after the race to receive their prizes and were delighted to try on their new AGA polo shirts and pose for the camera. Michael was heard to comment ‘who wants to share a picture with Jeremy Clarkson when you can be in a photo with all these lovely ladies’.   We take his point! 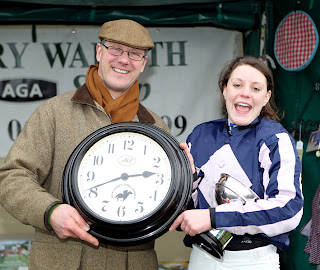 Thank you all at Yorkshire point to point club we had a brilliant time, met some super folks and put AGA firmly on the map in Yorkshire.