The Rain in Yorkshire Stays Mainly on the Show Ground!

Ten days ago we were feverishly setting our stall out at the Harrogate home of the Great Yorkshire Show. 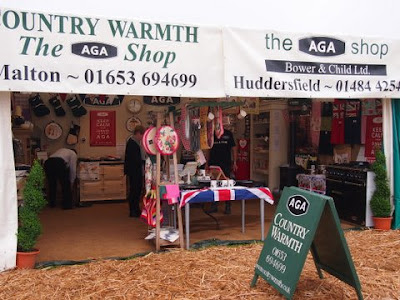 We always take a ‘live’ AGA with us. This takes our engineers two days to build and commission. Normally that work could be done in a day in a customers house, however leveling up a base take a little more time when you are effectively working in the middle of a field. Then there is man handling nearly half a tonne of cast iron on to our stand. Not an easy task at the best of times. In pouring rain it and sodden ground it becomes even more challenging. We have been doing the Great Yorkshire Show for over 20 years now and have rarely had such tricky conditions in which to set up. 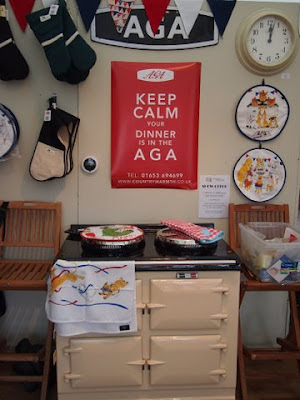 Last Monday saw all the cookware being unpacked and put on display. We had cleverly devised a washing line arrangement to display all the Tottering by Gently Hob Hats. 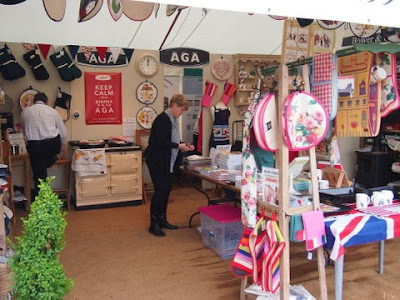 Bev Maddens fingers were worked ragged in producing some fantastic hand embroidered aprons which you could see hanging around the sides of our tented stand. We had a beautiful ex demo Falcon 1000 deluxe on the stand at a super sale price too. (That sold pretty quickly on Tuesday morning).  All in all we were feeling pretty pleased with our little ‘shop on the Show Ground’. 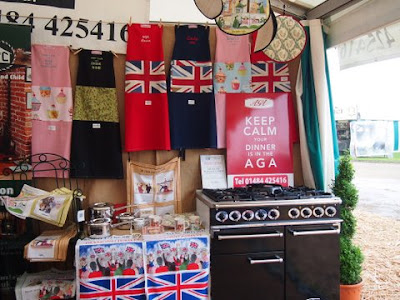 We stayed the night in Harrogate on the Monday to get a quick start on Tuesday morning, to beat the crowds we thought. It was more a case of beating the rain as it turned out. With a misty start and a rather slippy arrival to the parking across Crimple Golf Course we opened our stand for business. All was going reasonably well for most of the day until about 4pm when the heavens opened. And it rained and rained and rained! The really heavy wet sort of rain (is there any other sort?!?) The horse classes were immediately cancelled from then onwards but we hope the rest of the show would go on. At 6.30pm a trade stand official came around with a very official looking letter, announcing that the Show had to be cancelled. We were all disappointed on many fronts, the effort and expense of attending, the loss of trade and the general poor economic climate made for rather a fed up team. 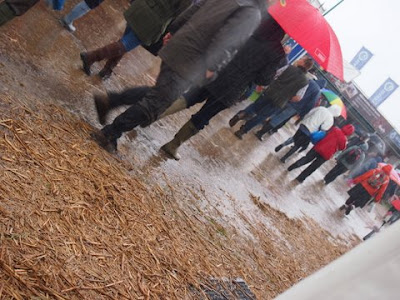 However, a nice warm shower, supper out and a bottle of wine and we were all back in action on Wednesday morning taking everything down and packing into the vans.
The only thing we had to wait for was the AGA to cool down. To be honest it was so useful having it working as it was drying all our wet weather gear after every downpour! 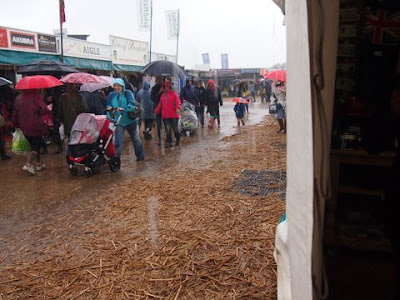 Thanks must go to our great team, Claire and Guy for helping with the set up and pack up plus our two temporary student helpers Alex and Georgina, who all coped ably in difficult circumstances.
Thanks must also go to all at the Yorkshire Agricultural Society, they had no choice in the end but to cancel- but not before they had put up a very gallant effort. Those involved were creative and bold in their attempts to beat the dreadful conditions. I wouldn’t have wanted to be the person to make the difficult decision to cancel the event. Furthermore contractually they are under no obligation to refund monies but I understand they are aiming to pay back approximately the stand hire for the two non-running days. This is very much appreciated by us exhibitors.
Lets hope next year we will all be back with a bigger and better show!