A fun day was had by all at the Sinnington Point to Point at Duncombe Park last weekend.

Held by kind permission of the Duncombe family on the old turf grounds in front of their house and providing an excellent course. We were thrilled to be part of a sizeable turnout for this popular Valentine’s day event.

We took along our own little horse lorry, but instead of a four legged occupant, we had a spring cleaned lorry and replaced the equine passenger with a cast iron one as we took the new AGA City60 along. In celebration of Valentine’s day we chose the pink baby AGA to be on show. However, not content with just looking good, we also made sure that we had it working!

This was a popular move. With temperatures barely above freezing and feeling much colder in the keen wind that swept across the open fields we were snug and smug thanks to the heat from ‘our baby’. We handed out cups of tomato soup – not only useful warming nourishment but also good for warming up frozen fingers. 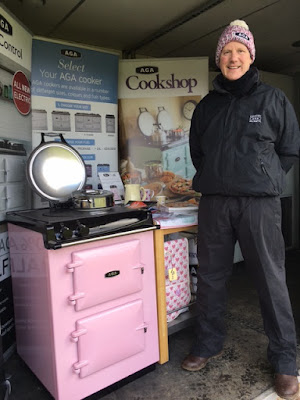 We dressed our stand with a Valentine’s theme using the pink Love AGA Cookware and sold several of these items, especially to gentlemen buying gifts!

We were pleased to welcome David Simpson, officially know as AGA Man on the Point to Point circuit and his wife Cindy who supported us by taking photos and providing AGA goodies. 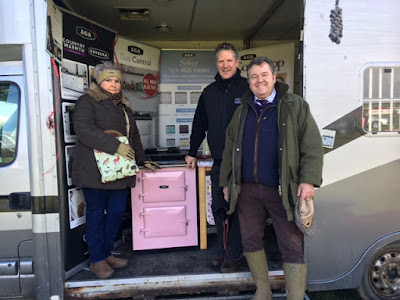 The winner of the AGA sponsored mixed open race, in a very fast time was Robbie from The Cleveland – a fine bay gelding trained by Mary Reveley. Second was Camden (Sarah Easterby) from the local Sinnington and third was Lucky Cody (Nicky Tinkler) from The Derwent. 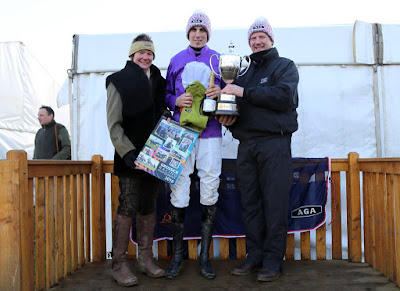 A fun and successful day was had by all and grateful thanks go to all that organised the event and took part.