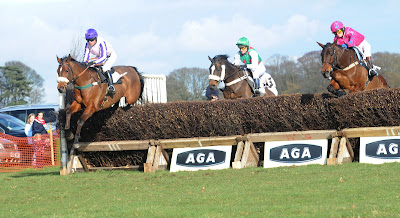 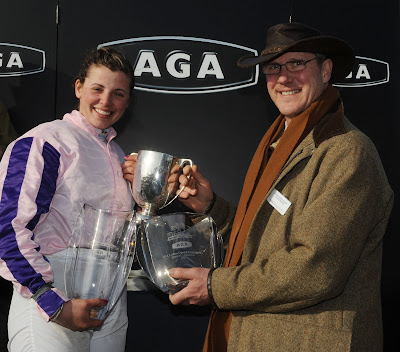 Sam Drake – who won on Optimistic Harry at Brocklesby Park in February – followed up with another first place at the Holderness point-to-point at Dalton Park in Beverley, Yorkshire, at the weekend with a fine ride on Keeverfield.
The horse was bred by Sam’s vet, John Millar, who raced him in Ireland. But then, not wishing to pay the cost of taking him to the sales, offered him to Sam for just £20, plus the cost of the haulage to Britain.
“He’s really cheeky and likes winding me up,” said a jubilant Sam. “I have to run him because when he’s really fresh I can’t get on him, as he bucks and jumps about. He likes to pretend that he’s really hard but he’s only joking – he’d never deliberately have you off.”
Unfortunately, Keeverfield – who went out at the Dalton Park race on Sunday March 13 as favourite – will not be going to the AGA grand final at Cheltenham on May 4th – he needs to go right-handed round a course, so the course is the wrong way round for him. Sam, though, is having a fabulous season and is currently lying second in the National Ladies’ Championship.
Michael Ashby Arnold of Country Warmth makes the trophy presentation to rider Sam Drake after Keeverfield won the AGA Ladies’ Open Championship at Dalton Park, where the Holderness Hunt held its point-to-point meeting.
Full results:
1.  Keeverfield, owned, trained and ridden by Samantha Drake.  SP 4/5 fav.
2. Narciso, owned by Cherry Coward, Mr W Thomas & Ms T Borsuk, trained by
Cherry Coward, ridden by Jacqueline Coward.  SP 7/2.
3.  Rich Hill, owned and trained by Ashley Dodgson, ridden by Lucy Horner. SP 8/1.
4.  Rimsky, ridden by Tina Jackson.
5.  Wilfie Wild, ridden by Lynne Ward.
6.  Supreme Huntress, ridden by Joanne Brown.
7.  What Happened, ridden by Jo Mason.
PU  On Y Va, ridden by Jo Foster.
8 ran.  Distances 4 lengths & 10 lengths.  Time 7min 3sec.