The majestic setting of the Dawnay estate was the venue for the Derwent hunt point to point on Sunday 4th march. The old turf was set to take a beating with horse boxes being towed on to the ground from the very start.  After continuous drizzle interrupted only by the occasional snow shower the going was officially branded soft by the end of the third race. The mud was such that by the end of the day, those hardy individuals left standing were even wearing this seasons must have accessory ‘mud ‘ and probably need towing around even on foot! 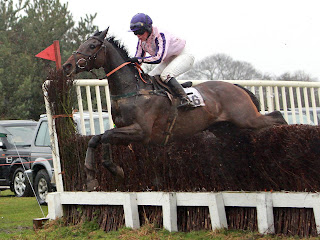 In true Yorkshire style the hospitality was exceptional. Never have we seen such a splendid hospitality tent, lined out in silk, with tables groaning under the weight of plates of home made baking. Seasonal blooms and twinkling candles graced the dining area (As the afternoon got darker we needed the candles just to read the race card.)

The big race of the day for us saw mixed fortunes for the lady riders.
With Jacqueline Coward lying in fifth place in the national AGA total control Lady Riders Points Championship it was all to play for. The other Easterby descendant, Joanne Mason was having a great day, and was sure to put the pressure on her blood relative. In the end it was the diminutive Sam Drake on her own Optimistic Harry that put in a very polished performance to take the 10 points, with Joanne second and Jacqui having to be content with  a third place on this occasion. 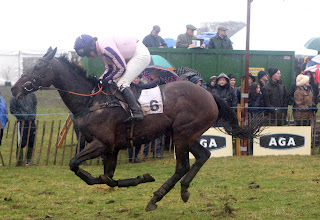 Lucy Bell survived a tumble from ‘whispering Death’ (an ominous name?) and shivered on to our stand for a warming cup of soup. We even persuaded her to have a photo taken proving not only was she still in one piece but not even her mascara had moved, apparently Lancome’ s finest for those that need to know!

We had some added fun provided for by 2 tips from fellow race goers. Just smudge was heavily fancied in the third race and duly ran his socks off under Oliver Pimlott but after 2 laps on what was fast resembling a quagmire he had to settle for a respectable third. His stable mate Pear Charles in the fifth race proved his unknown quality is still an unknown quantity . . ! 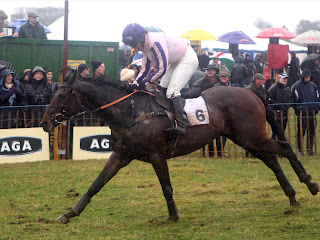 Two weekends ago we  were lucky enough to enjoy a day at the Races on the Costa Del Sol, courtesy of Sarah and Peter Haley at Sunshine Racing. This week end we felt privileged to enjoy a day out courtesy of the Derwent Hunt, we deemed it ‘snowstorm point to pointing’. Thank goodness we have the AGA on which to dry all our wet gear and thaw out our frozen hands and bottoms on! 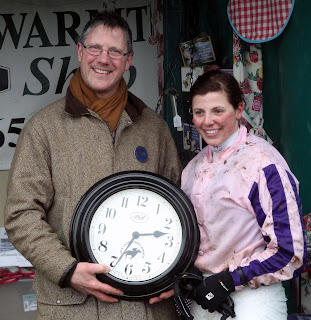 Lets hope everybody else  dries out in time for our next Aga Ladies Open Race at Dalton Park on 11th March. 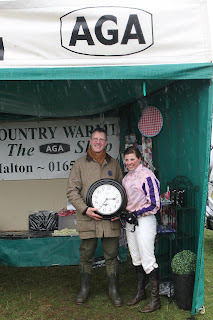