Flatbreads have become very popular, they can be made with plain flour, wholemeal flour, maize flour and most recipes are unleavened – not needing yeast. There are many, many types of flatbread from countries including India, Africa, Scandinavia, Turkey, Greece, Israel, Middle East, Lebanon, Mexico, USA and the UK, such as farls from Northern Ireland, Ireland and Scotland, Hoggan from Cornwall and Staffordshire Oatcakes.

Flatbreads make good wraps for dishes such as quesadillas, easily made on the AGA Simmering Plate. Or try enchiladas with rolled wraps, or tortillas, containing a filling and covering with a sauce and grated cheese.

Naan breads (which do contain yeast) are easy to make on the AGA hotplates, initially cooking on the Simmering Plate and finishing off on the Boiling Plate for that authentic charred finish.

Potato bread can be made with cooked, mashed potato such as the Soda Farls known in Ireland and Scotland. Farls are cooked on the Simmering Plate. They are delicious served at breakfast or to accompany grilled meats.

Bought flatbreads can be reheated under foil on a baking tray in the Roasting Oven. Pitta breads and naan bread can also be heated by placing on the Simmering Plate. 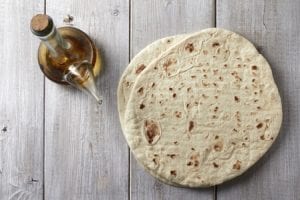 Scones are quintessentially British, served with a delicious jam and (clotted) cream. However there are many variations you can try out such as adding a handful of fruit to the mixture could be currants or sultanas, or chopped apricots, cranberries or chopped dried figs or try adding some spices; mixed spice, or cinnamon, or ground cardamom. A mixture of flours also rings the changes such as half wholemeal and half white flour for a different texture and flavour.

Savoury scones are delicious and can be used instead of bread. The favourite savoury scone is probably cheese. My tip is to add mustard powder to the dry ingredients which enhances the cheese flavour and a pinch of cayenne pepper powder. It is advisable to place savoury scones onto Bake-O-Glide so that melting cheese does not stick to the baking sheet or cold plain shelf.

Scones are usually made by stamping the dough into individual round shapes (classically sweet scones with a fluted cutter and a plain cutter for savoury scones) or cut into squares or triangles, with a sharp knife, for a more artisan look. As a change place the scones into a round cake tin for a scone crown, or into the half size AGA roasting tin for a linear arrangement or make them into whirls.

Suggested savoury flavourings include snippets of cooked ham and small cubes of cheese, AGA-dried cherry tomatoes and olives, chopped herbs such as chives, parsley or rosemary, cheese and chutney, walnuts and seeds, blue cheese and walnuts, smoked salmon and dill – flavours are only limited by your imagination and of course family preferences.

Oven scones are cooked in a hot oven, the Roasting Oven, for a short time about 10-12 minutes to give a good rise and golden brown finish. 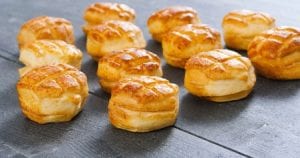 Before cooking ranges with ovens were present in British households traditional ‘cakes’ were cooked at home on vessels hung over the fire; bakestones, griddles or girdles. Hence we have a heritage of scone-type flat cakes for example Drop Scones (small pancakes), Welsh Cakes and Singing Hinney (Northumberland). These delicacies come into their own in these unsettling times as they use store cupboard ingredients, flour, fat, sugar, and dried fruit.

Cook Welsh Cakes, Singing Hinnies and similar flat cakes on the AGA Simmering Plate using a circle of Bake-O-Glide. When it comes to Drop Scones I think they have a better external appearance by cooking direct onto the Simmering Plate, which has been wiped over beforehand with a piece of kitchen paper moistened with rape seed oil.

Drop Scones can be served at any time of day and children can cook their own (obviously under the supervision of a responsible adult). Suggest they ‘write’ their own initial with the batter, or make a shape such as a cat, Mickey Mouse (if they know who Mickey Mouse is!) hearts, starfish etc. For precision some people like to use a chef’s ‘squeezy’ bottle for the pancake batter.

Drop Scones can be plain or contain fruit such as blueberries, banana or raspberries, even chocolate drops! Savoury ones can be made with herbs, wasabi or pesto.